Since the first 10,000-watt cutting machine entered the market in 2017, the efficiency of laser processing has been a qualitative leap, and with the increase of power, the limit of speed has been constantly refreshed. In 2020, several 30,000 watt laser cutting machines have been installed in end-user factories, and the batch application of 30,000 watts has once again refreshed the market’s understanding of laser cutting efficiency.

MAX Laser stated that this set of parameters was summarized after several months of actual practice at the production base of a certain agricultural machinery customer in Shandong. It is reported that the customer has introduced 10 sets of 10,000 watt laser cutting machines equipped with MAX lasers (including 5 sets of 15kW, 2 sets of 20kW, 3 sets of 30kW), 7*24 hours of uninterrupted operation proposed very high requirements for the stability of the laser. Since MAX laser entered the factory, its stability has withstood the test of actual combat, and it has satisfactorily met the needs of customers for intensive production. The specific parameters are as follows: 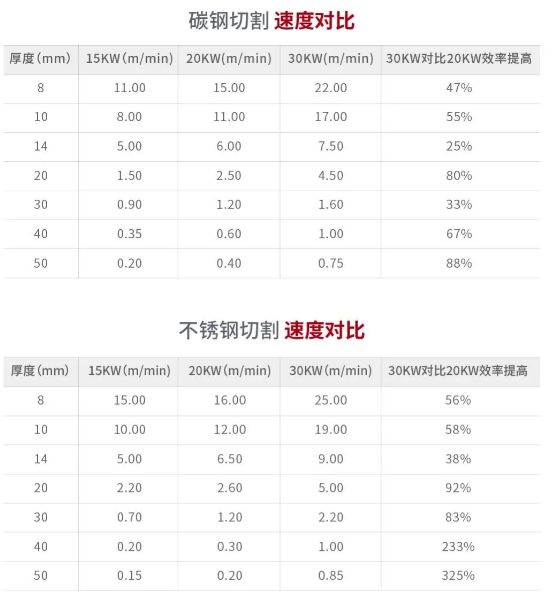 It is reported that this customer mainly provides sheet metal parts for agricultural machinery and equipment, and mainly adopts air cutting technology in order to balance efficiency and cost. At present, 8-16mm carbon steel plates account for 70% of the customer’s daily processing volume, of which 5 sets of 15kw are responsible for carbon steel cutting tasks within 10mm, 2 sets of 20kw mainly cut carbon steels within 14mm, and 3 sets of 30kw have been able to cut carbon steel within 20mm. For this customer, the significance of 30,000 watts is very obvious: 30kW doubles the batch processing efficiency of 20mm carbon steel, which is 80% higher than 20kw and 200% higher than 15kw. In addition, the customer also plans to introduce 40kw equipment in the future to increase the production capacity of 20-30mm carbon steel through 40000-watt air cutting.

Redefine the 10,000+ watt laser and make the market cake bigger.

As laser power continues to increase, some people believe that the value of ultra-high power lies in the ability to process thicker materials. However, as far as the current market is concerned, the processing demand for ultra-thick plates exists, but the quantity is not large. MAX Laser brand leader Zeng Jianfeng believes: "MAX Laser and partners promote the implementation of 30,000 watt lasers, aiming to improve the comprehensive ability of laser technology to solve user production problems and redefine the industry's understanding of the capabilities of 10000+ watt laser."

Since the advent of the 30kw laser, the main battlefield has been sheet metal cutting. In particular, the 30,000W laser landing directly forms an advantage in the plasma processing of carbon steel within 20mm, but in fact the ability of the 10-30kw laser is far more than that. Zeng Jianfeng said: "At present, MAX Laser has become more mature in the application field of 10,000 watt cutting. At the same time, the layout of 10,000 watt welding and 10,000 watt cladding is being carried out simultaneously, and it is continuously verified at the processing site of strategic partners."

Although the application of 10,000 watt laser welding is not yet popular, as the process technology continues to temper and gradually mature, the market for 10,000 watt welding will gradually open up. In addition, the 10,000-watt laser cladding has also entered the process verification stage. Zeng Jianfeng believes: “The 10,000-watt laser is not only a cutting tool, but also a big killer in the welding and cladding industry. At present, everyone is squeezed in the cutting market, and it is becoming more and more difficult to divide the cake in this market. MAX Laser is willing to cooperate with equipment manufacturers in depth by activating the 10,000-watt laser in the field of welding and cladding, making the cake of downstream laser applications even bigger, and providing more profitable weapons for the upgrading of world manufacturing industry." 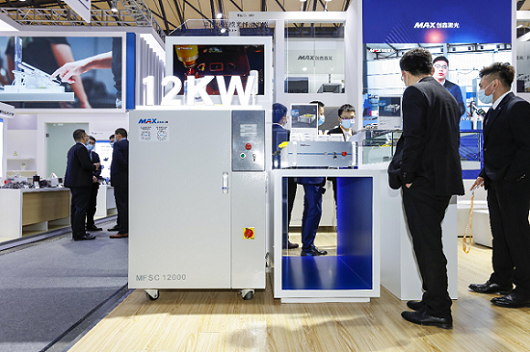 Master the core technology and break through the single module 12kW

The rapid development of the 10000-30000watt market has brought tremendous growth momentum to laser companies. Driven by the large sale of 10,000-watt lasers, MAX Laser achieved a double increase in revenue and net profit in 2020, of which revenue increased by 53% to 1.56 billion RMB, net profit nearly doubled to 190 million RMB, and cash flow reached 1.2 100 million RMB, financial indicators show a healthy development trend in an all-round way.

Zeng Jianfeng believes: "The substantial increase in sales of MAX Laser last year was due to the category-driven effect of the domestic 10,000-watt market. MAX Laser will focus on efficiency in 2020 and seek key breakthroughs in 10,000-watt products. This move has led to the full explosion of the company's continuous product line. Continuous product sales have increased by more than 70% compared to 2019, and the number of shipments has doubled, contributing 80% of sales throughout the year."

As of March this year, MAX 10000-20000-30000 watt lasers have accumulated sales orders of over 700 units, and shipped over 50 units of 20kW. The world's first 10 units of 30kW have entered end users in batches. Zeng Jianfeng said: “In the future, MAX will maintain high R&D investment in ultra-high-power lasers, continue to overcome technical barriers to ultra-high-power lasers, and form linkages with upstream and downstream industries, and use the power of 10,000 watts + to develop the laser market. Bigger and better, use the opportunity of 10,000 watts+ to create a new chapter in the development of the laser industry."